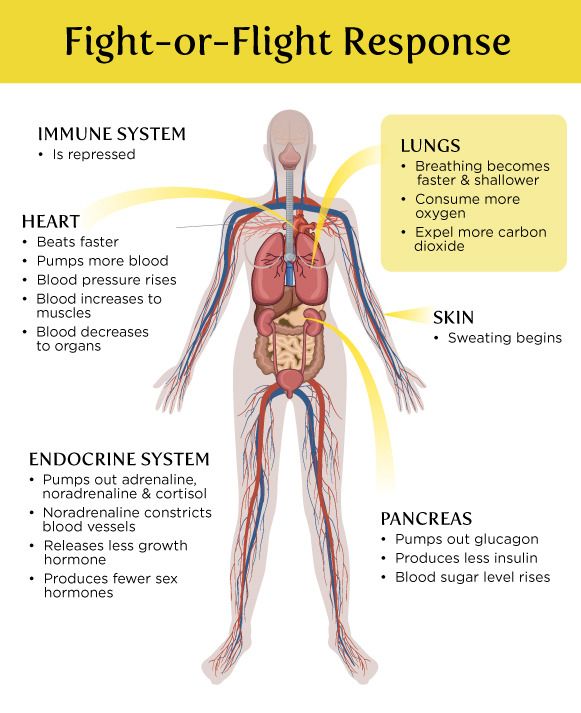 The World We Created Causes Us to Over Breathe

What is the Cause of Over Breathing?

I’ve already written about the importance of breathing to our health, the biochemistry and mechanics of breathing, what optimal breathing looks like and what it doesn’t look like, so it is now time to discuss the cause of dysfunctional breathing or over breathing.

In short, STRESS CAUSES OVER-BREATHING. More specifically, we become conditioned to respond to stress by over-breathing or mouth breathing as an emergency response.

Our innate response to stress is the ‘fight or flight’ state which is an evolutionary response to a perceived threat, and served to effect changes in our bodies that prioritise or make us more capable of ‘fighting’ or ‘fleeing’. For example, if a wild animal poses a threat to our safety, we choose to either fight or flee the source of this extreme stress. In this evolutionary example, the stressor either goes away either by us successfully fighting or fleeing the animal. Or we die. There was indeed an “emergency” that asked for a body/mind response that called upon all of our resources. With the removal of the stress, our physiology returns back to a basal level and we return to the tasks of living.

The modern stressors we deal with are, more often than not, far less threatening to our safety. Whilst the the sources of stress are often far less severe, due to the culture we have created being far different to the environment our bodies evolved or adapted to, they are far more chronic or long lasting. Unfortunately we do not often return to this basal low level (or zero level) of stress we predominantly existed in (outside of emergencies) in times past. As a result we reduce our body’s ability to deal with more acute stressors and we often regularly respond in ‘emergency’ fashion to stressors that do not require this response.

Nevertheless, the process of evolution has led to us responding to any stress in a way that has long been our mode of functioning, because that its what we evolved to do. That the severity and types of stress we now deal with are vastly different to those we evolved dealing with is not of consequence to the body. Our safety is far more assured than in previous times, yet our body still responds with this ‘fight or flight’ mechanism.

When breathing rate and volume rise we over breathe. When we over breathe we lose too much CO2 and the blood becomes too alkaline. As a result, haemoglobin holds on to inhaled oxygen in the blood stream, cells become deprived of oxygen and we experience different symptoms.

Once this response occurs regularly enough it becomes a conditioned response or a habit. Over time, this adaptive response, originally designed as an emergency response to an acute stress, becomes our normal mode of functioning.

But, as humans we are born ‘obligate nose breathers’ meaning that we do not possess the voluntary ability to breathe through our mouths. Mouth-breathing, the most common example of over-breathing is a learned response triggered by our emergency response to stress.

For example, you will notice that newborn infants breathe quietly through their nose all of the time. However, if their nose becomes blocked they will struggle to get air into their lungs. As they have not learned the response to mouth breathe, they will begin to suffocate. As a response, they begin to cry which allows large volumes of air to enter the lungs rectifying the emergency. The infant then returns to its normal nose breathing.

When subsequent stressors arise they repeat this emergency response, until they become conditioned from a very early age to respond to any sign of stress with this emergency mouth breathing response.

In our modern world of chronic low level stress, mouth-breathing, originally an emergency response, becomes a conditioned response and a habit. And, eventually our normal way of functioning.

The parasympathetic nervous system, on the other hand, promotes a “rest and digest” response, thus a calming of the nerves return to regular function, and enhance digestion. Some of the functions of the PSNS are:

If you observe the cascade of changes that are evident when we over breathe and are in ‘fight or flight’ responsiveness, you will see that this cascade of changes accounts for many of the pathologies that occur in a great number of the chronic ailments we suffer from in the modern world.  Which, in turn, points out that over breathing is not something that we should ignore or take for granted.

The Breathing Dynamics training program will teach you to beak the cycle of over breathing, and help to get out of habitual ‘fight or flight’ responsiveness.