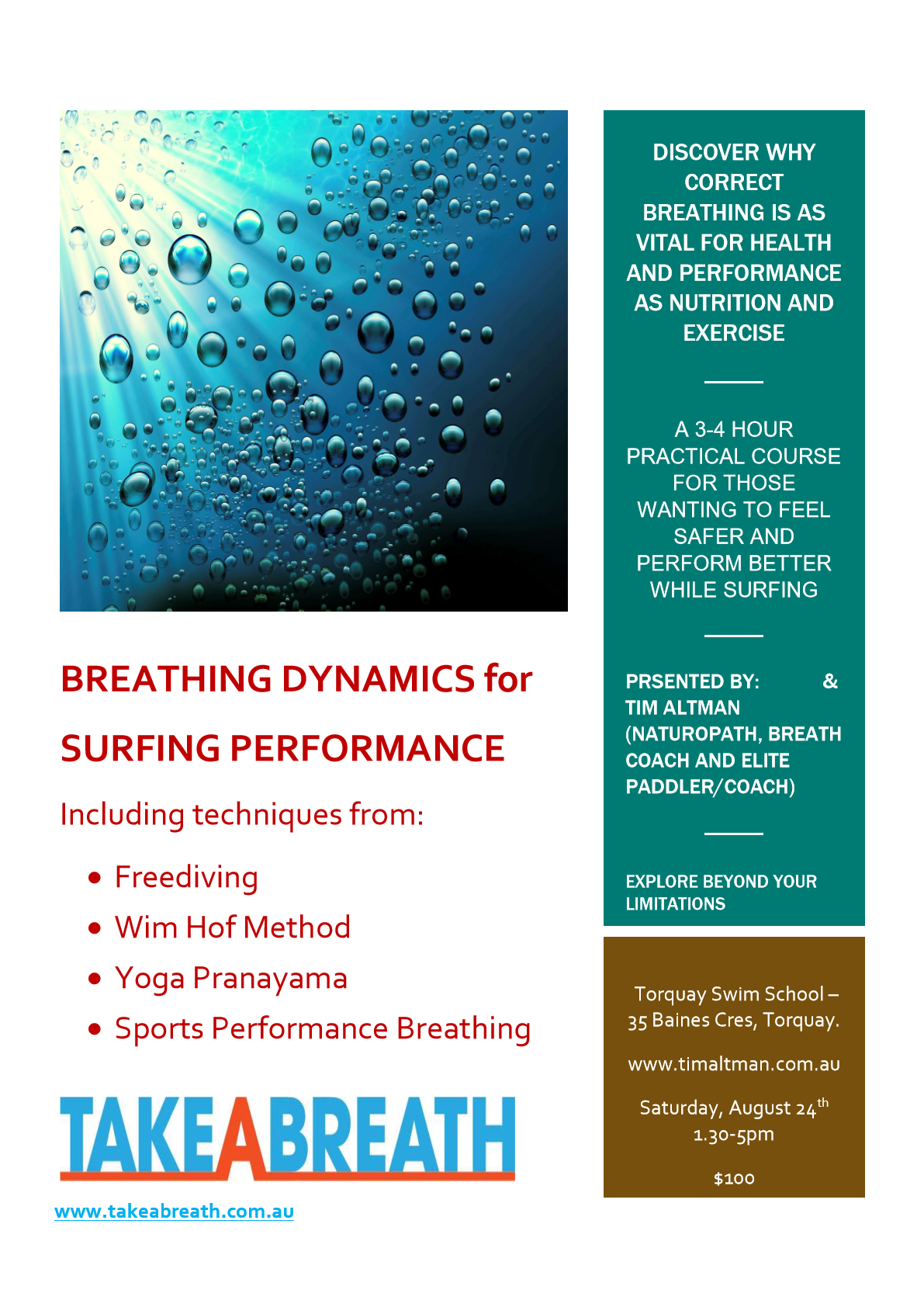 Breathing for Better, Safer Surfing Performance – contact me to register – tim@timaltman.com.au or 0425 739 918

Article: Keep Your Mouth Shut To Improve Your Performance

A great article by Annette Verpillot of Posturepro (shared by the ‘Strength Sensei’ website, www,srengthsensei.com), on the importance of nose breathing for athletic performance.

Here is a quote from the article that summarises much of the content.

“It has been known for many years that people with proper occlusion of your mouth have greater endurance and better performance than those with malocclusion. The alignment of the muscles of the jaw and teeth can have a direct impact on a player’s performance and strength, as the upper and lower jaw are what allows you to connect your anterior and posterior muscular chains. Without the jaw it would be impossible to exert strength.”

“The vast majority of health care professionals are unaware of the negative impact of mouth breathing on global health and sports performance. The development of the jaw and all the functions attached to it, nasal breathing, chewing, suction, swallowing and phonation, will either put the body in a state of physiologic health or state of dysfunction.”

In addition, the article also discussed that (and I’ve added to the points they make) when you nose breathe, you:

This article was shared by a close friend and colleague of mine, Ramon Andersson, head kayaking coach at the Western Australian Institute of Sport, who has done a lot of training of optimal breathing both personally and with his athletes. Our subsequent discussion agreed that once you get above anaerobic threshold in intensity of exercise, it is often necessary to use the mouth to facilitate breathing, as the intensity is at a level where it is extremely uncomfortable to nose breathe on it’s own.

The consensus is, from our own trials and with those we have trained, that at this level of intensity, as long as the inhalation is driven by the diaphragm first, before using the chest and shoulders to increase the volume of air inhaled, then the efficiency of breathing is still optimised. That is because using the diaphragm will allow you to use the full lung volume for gas exchange, as well as having greater control of both inhalation and exhalation which then allows you achieve slower breathing rates at certain intensities of exercise. The importance of this is that of all functions controlled by the autonomic nervous system (meaning that they are automatic), breathing, via the diaphragm, is the one function we can consciously control with ease (with training of course). As such, our breathing can influence other bodily functions controlled by our autonomic nervous system – including heart rate, digestion, the immune system, neurotransmitter levels etc.

Getting to the point; being able to breathe at lower breathing rates for a certain level of exercise intensity, will also allow you to have a slower heart rate, greater oxygen delivery to cells for energy production, reduced lactic acid levels, and for you to be more relaxed whilst exercising at this level. In other words, you will be far more efficient, or get more from your body.

If you would like to learn how to breathe more efficiently whilst exercising, and therefore increase your performance potential, contact me at tim@timaltman.com.au or call 0425 739 918.

Keep Your Mouth Shut to Improve Your Performance