Video: We Breathe Twice As Often As We Should and It Affects Our Health in Many Ways

We breath twice as often as we should (according to medical diagnostic norms).
If our blood pressure were twice as high as it should be, or we ate twice as much as we should, we all know that would lead to health and well-being problems.
Yet we take our breathing for granted, not realising that over-breathing upsets the delicate biochemical balance in our respiratory system that dictates how we get oxygen from the air we inhale in our lungs into the cells of our body for energy production (all known as, and explained in detail by ‘The Bohr Effect’).
he implications of this are:
1. We produce less energy – contributing to fatigue related illnesses, and poor mental functioning.
2. We are more predisposed to apnoea episodes – resulting in poor sleep, low energy, poor cognitive function, fatigue, and a potential flow on to increased likelihood of suffering inflammatory conditions.
3. Smooth muscle constriction around our breathing tubes predisposing to asthma and breathing difficulties, and also conditions relating to constriction or reduced function of all of the other tubes servicing our body (circulation, digestion, lymphatic, urinary etc) – these include IBS, reflux & other digestive complaints; high blood pressure & hypertension: sinusitis, hay fever & respiratory system illnesses; headaches and migraines; anxiety & depression.
The good news is that learning how to breath functionally again is not that hard, and does not take that long. And you will feel better for it…
Email Tim at tim@timaltman.com.au or call 0425 739 918. Tim is available in clinic at: Barwon Heads – 13th Beach Health Services Torquay/Jan Juc Melbourne – Sth Melbourne or Ivanhoe Or via Online Consultation

Do you want to know how you can influence your quality of life by understanding the role of breathing in rest, activity, attention and composure?

Breathing is central to all life.

It is the one thing that we have conscious control of that we do more than anything else – up to 30,000 times per day on average.

BUT, did you know that:

And that most of us OVER BREATHE – both in rate and depth.

And breathing should always happen through the nose driven by the diaphragm. Most of us alternate between mouth and nose breathing using predominantly the chest and shoulders, causing us to breathe too much volume of air, with poor postural strategy using far too much effort in breathing.

This over breathing, or dysfunctional breathing, when repeated up to 30,000 times per day can result in significant compromises in optimal functioning.

Do you know what it means to breathe optimally?

The limiting factor in OPTIMAL RESPIRATION, and therefore OPTIMAL ENERGY FOR OUR CELLS, is not a lack of oxygen that we inhale? We breathe in 21% oxygen and exhale 16%, so we only use less than one quarter of the oxygen that we breathe.

It is a lack of oxygen released into cells due to low levels of carbon dioxide (CO2) caused by OVER BREATHING OR DYSFUNCTIONAL BREATHING!!!!

Yet most of us OVER BREATHE or MOUTH BREATHE.

In 1903 Danish physiologist Christian Bohr won a Nobel Prize for his discovery that the lower the partial pressure (and therefore concentration) of CO2 in the arterial blood, the tighter the bond between circulating haemoglobin (Hb) and it’s bound oxygen (O2). The tighter the bond between Hb and O2, the less the amounts of oxygen released into tissues for energy production.

OVERBREATHING/DYSFUNCTIONAL BREATHING CAN RESULT IN:

When you reduce oxygen release to cells, those cells lose functionality or under perform.

OPTIMAL BREATHING CAN RESULT IN:

THE IMPORTANCE OF MEASURING AND MAINTAINING OPTIMAL CO2 LEVELS.

Over breathing causes hypocapnia (low partial pressure of CO2 in arterial blood) which results in both vaso- and broncho- constriction. And if the required ‘reservoir level’ of CO2in the lungs after expiration (namely ETCO2) is too low there will be constant interference in smooth muscle tube function and fluctuations in oxygen concentration at cellular level – causing sub-optimal cell regeneration with the accompanying chronic tiredness, sleep disordered breathing, poor concentration and lack of energy and stamina.

This is a sophisticated bio-feedback monitoring instrument that optically analyses the exhaled breath, establishes the ETCO2 and displays it in various graphic formats along with measurements of breathing rate and heart rate variability. It connects via USB and works on most PCs and laptops. 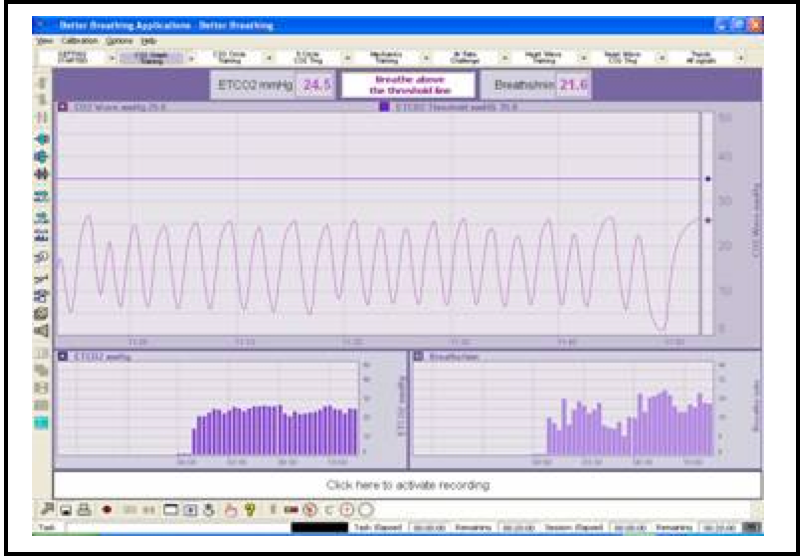 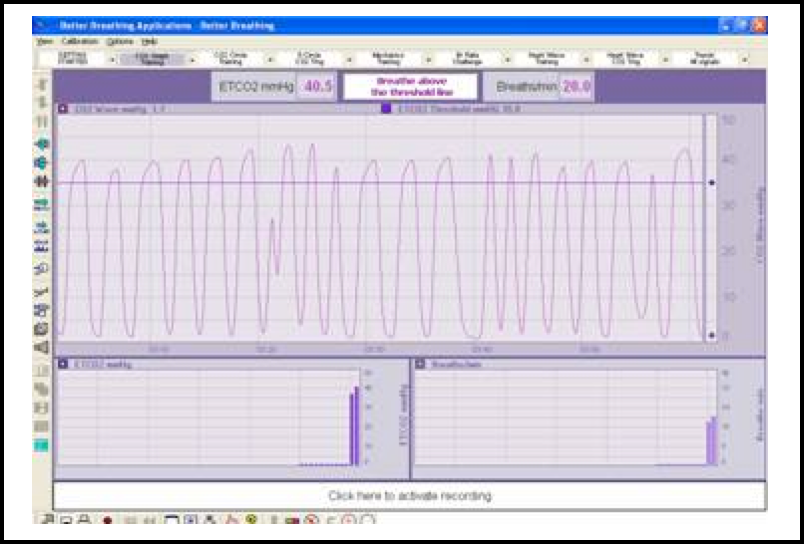 ETCO2 above the horizontal line showing 40 – 45mm Hg pressure which is the correct level for optimal functioning.

We are the only clinic in Victoria to use this new CapnoTrainerTMbioefeedbacktechnology to assess your breathing levels and retrain you to breathe optimally.

For athletes and business people, the benefits of breathing retraining can be both surprising and life changing. Both performance and efficiency of movement will improve dramatically.

We focus on training you to:

This will result in the following benefits:

We teach Breathing Dynamics to the public both one on one in clinic or in courses for groups.