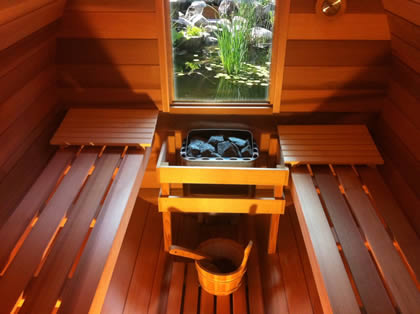 The skin is the body’s largest organ and our interface with the physical world. Through perspiration, it acts as an important vehicle for the elimination of toxins. The skin is often referred to as the ‘third kidney’.

Saunas assist greatly in the elimination of toxins. In the process the skin is cleaned of surface bacteria and dead skin cells – something that cannot be done by just taking a shower or bath. The sauna also cleans the capillaries, resulting in vastly improved skin condition.

Saunas have been used for thousands of years by Scandinavians, Russians, North American Indians and many others.

In Russia and Finland, there is a saying that every day you take a sauna is a day that you are not ageing.

Hippocrates, the founder of Western medicine more than two thousand years ago, said: “Give me the power to create a fever, and I shall cure any disease”.

Although misunderstood as a symptom of disease, fever is actually a part of the body’s natural healing response. During a fever, the functioning of the immune system is stimulated, whilst growth of bacteria and viruses are inhibited. All of us would be aware of the great feeling of cleanliness and well being experienced after a fever has passed through us. Saunas elicit similar responses and are often called ‘artificial fevers’.

Research has supported the use of saunas for treatment of pain management (including arthritis, fibromyalgia, sports injuries etc), in detoxification programs, weight loss, lowering of blood pressure and stress relief.

Russian and Finnish research has shown the sauna to be an irreplaceable training modality for athletes, reducing recovery time and soreness post exercise/injury, and increasing muscle power and concentration. It also reduces the cold, nervous feeling that causes shivering before competition and that can make athletes prone to injury.

The psychological impacts of the sauna have been shown to be just as significant. After a sauna, feelings of stress, lethargy and tiredness are replaced with a generalized feeling of well-being which includes lightness, energy, relaxation and optimism.

Prior to the late 1980 Olympics, forest biochemists in the former Soviet union developed a pine needle oil derived from the non-water soluble fraction of the paste from Scotch Pine (Pinus sylvestris) and European Spruce (Picus abies) needles combined with the oil fraction isolated in Siberian Fir (Abies siberica) needle extraction. Their research found that it significantly enhanced the therapeutic benefits of sauna therapy including elimination of lactic acid and reduced recovery time and soreness post competition, training and injuries.

The oil is a natural complex containing many biologically active substances including vitamin E, carotenoids, phytosterols, terpenoids, polyprenols and pure conifer essential oil. It is rubbed on to the torso and any sore or injured areas during a sauna

Research in Russia found that the positive, therapeutic effects of saunas were significantly enhanced when used in conjunction with this oil based conifer needle extract.

This research compared those who used saunas alone with those who complement their sauna with the needle extract. Specifically it was found that far greater than using a sauna alone, using Pine needle oil in conjunction with a sauna: